Holding history in my hand 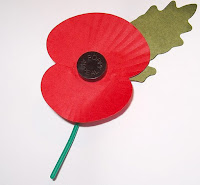 Have you ever felt like stealing a library book?  Just never returning it and saying it was lost?  I never have - until now!


A few months ago, I was researching an article in anticipation of the centenary of the start of the First World War next year in 2014.  I was focusing particularly on the red poppy as a symbol of remembrance in all the countries who were involved in that dreadful conflict.  The reason we all wear red poppies to mark Armistice Day on November 11th each year is because an American lady called Miss Moina Michael read a poem written in the trenches by a Canadian Army doctor called John McCrae about the red poppies which grew in the devastation of the battlefields of Belgium and northern France.  The poem was called In Flanders Fields and begins:

"In Flanders fields the poppies blow

Between the crosses, row on row"

Miss Michael decided to sell paper poppies to raise money for the families of those soldiers who did not return and this symbolic gesture and means of raising funds grew and spread across to France and the United Kingdom very quickly.  The red poppy is now worn as a symbol of remembrance every November and poppy wreaths are laid on war memorials across the world.

As part of my research, I wanted to read more poems by John McCrae.  I discovered through the amazingly wonderful resource that is the Houston Public Library website that there was a book of his poems held in the Central Library.  I ordered it online, thinking very little more about it, until I went to collect it from my local library. 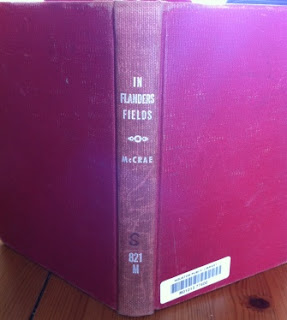 It is called In Flanders Fields and Other Poems By Lieut-Col John McCrae MD, with An Essay in Character by Sir Andrew Macphail.  The book contains the 27 poems which make up McCrae's complete works.  Sadly, after serving at the battlefront as both a doctor and manning the artillery guns, McCrae died of pneumonia in a military hospital in January 1918.  Sir Andrew Macphail, a friend of McCrae's from university days wrote an essay to accompany the poems with details of McCrae's life, his writing, his medical and military careers and his sad death and funeral.  McPhail’s essay is dated November 11th, 1918, the day of the Armistice.  It was a fascinating book to have found by chance, but that was only part of its appeal.  Unlike so many books I have borrowed from libraries in the UK and the US, this book does not have a brightly covered fly leaf protected by a thick covering of plastic.

It has instead a simple faded red cloth cover with the title printed in white lettering on the spine.  The pages inside are yellowed and a little tatty at the edges.  There is a photograph of the handsome, almost-smiling poet in his army uniform opposite the title page and between the two is a protective sheet of tracing paper, now mottled brown.  It has a lovely pencil-sketch of trees and a village which the poet drew on the back of a postcard.  The only sign that this lovely old book came to me via a hi-tech digital pathway is the shiny clean bar-coded sticker on the front so that HPL can keep track of it. 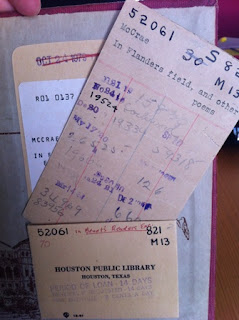 It was, however, as I reached the back of the book that this wonderful piece of history in my hands came to life.  Inside the back cover of the book is stuck a cardboard holder for an old library card, something I recognized from my childhood library days but which my kids had never seen before. At the top of that card, someone had typed (using a typewriter of course) the name of the author and the title of the book and had written the code number with a fountain pen above it.  Each time the book was taken out by a reader, a librarian hand-stamped the date it was due to be returned onto the card and placed it inside the holder.


When I started to decipher the dates stamped on the card, I was astonished to find that the first reader to borrow the book from the Houston Public Library was due to return it by July 21st 1919, the year the book was published and less than nine months after The Armistice.  Knowing this book was almost one hundred years old and had been read by so many generations was very moving for me.  I was amazed that such a book wasn't kept under closer supervision, perhaps in the reference section of Central Library.  I became so terrified that I might cause it harm, it's been sitting in a zip-lock bag ever since.

And thus I fell in love with this book, to the point where I am now finding it hard to return it.  Having extended my borrowing period for the full six weeks I was allowed online, I went to see our local librarian in person and hearing my please of 'vital research source', she kindly gave me another six weeks.  But that deadline came and went at the beginning of last month and now my fine is more than $4 (OK, hardly a fortune, but shaming enough) and I still can't bring myself to return this special book.

The page to which I keep returning is the facsimile of an autograph copy of the poem In Flanders Fields.  It was written with pen and ink by McCrae and signed.  His looping cursive script with linking lines tying words together is very much of its age, only just decipherable and a treat to read. 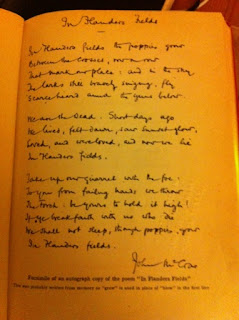 I know I have to return this book to its rightful place, but I can't help thinking I will take it out again, and again, perhaps every November just in time to remind myself why I am wearing a red poppy of remembrance.

Posted by Caroline Leech at 1:09 PM