Future Library - a literary treasure trove for the next century


Recently I heard about an amazing new artwork call Future Library being created in Norway by the Scottish artist, Katie Paterson. But this isn't a painting or a sculpture. This work of art is a forest of trees, and in one hundred years, it will become an anthology of books. Literally!

Katie Peterson and The City of Oslo have planted a thousand trees in a forest just outside the city. The trees will be looked after until 2114, one hundred years from now.  In each of those hundred years, one author will be commissioned to write a manuscript of some sort and that piece of writing will be placed, unpublished, in a secure and specially designed room in the new public library being built in Oslo. They will all remain unread until the collection of one hundred manuscripts is complete.
Then in 2114, the trees will be cut down and the wood will be used to supply paper for a special anthology of books in which 100 years of writing will be published.

Last month, Katie Paterson announced that Canadian author, Margaret Atwood, is the first author to be invited to write and submit something for the anthology which will not be read for a century. Margaret Atwood was born in 1939, but how strange to think that many of the writers who will take part in this amazing artistic concept have not even been born yet (in fact, their parents might not even have been born yet!)

The Future Library website has two lovely films about the project.  There is a short movie with Katie Peterson talking about it while searching the forest floor for the tiny trees to be planted, and there is also a wonderful interview with Katie and with Margaret Atwood herself.

I love this idea and hope it does not fall victim the vagueries of local government budget cuts and political posturing. And I so wish that I were the type of person who could have and share the vision for such an optimistic project - optimistic for the future of reading and writing and indeed, for the future of the human race - but I'm afraid I'm just not. I am simply the kind of person to feel enormous disappointment that, chances are, I won't be around to see those beautiful trees become beautiful books around the time of my 147th birthday.

For more information, visit: futurelibrary.no and to keep in touch with the authors as they are invited to take part, Like Future Library on Facebook.

x
Posted by Caroline Leech at 6:39 PM No comments:

The Raven Cycle - the joy and the pain of sequels 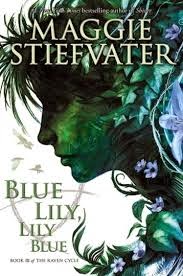 Don’t you just hate waiting for a sequel? Remember how long we had to wait for the next Harry Potter, and then the next?  Sweet torture indeed.

A friend of mine told me just this week that she refused to read any of James Dashner’s fabulous Maze Runner books until the final one was published just so she didn’t have to constantly be waiting for the next book to come out.  I certainly can understand what she means because reading a series of books as they are each published can be quite hard work. 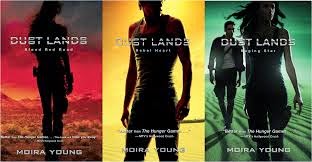 As an example, I absolutely loved Moira Young’s amazing Blood Red Road, the first in the Dustlands trilogy, but by the time that the second book was published, I realized that I had forgotten much of the detail from the first. So I had to re-read Blood Red Road before starting on Rebel Heart.  But then, of course, when the final book, Raging Star was published earlier this year, I had the same problem, so yes, I read (or rather, listened to on audiobook) both of the first two books again.  Luckily both of them more than stood up to re-reading, even for the third time in the case of Blood Red Road, and having the full story so fresh in my mind meant that final book was even more wonderful than it might have been had I been struggling to remember who, what, where and when led to that opening chapter.

Now, however, I am faced with an even worse dilemma.

If you have recently asked me (or even if you haven’t) what has been the best book I have read over the last couple of years, I will have told you without hesitation, The Scorpio Races by Maggie Stiefvater.  It is not only my favorite book of recent years, but probably my favorite audiobook EVER! Sadly Maggie has been clear that Scorpio Races is a standalone story, and will have no sequel (boo!), but she has given us another beautiful gift in four parts instead.

The Raven Boys introduced us to the lovely Blue and to the boys with ravens on their school blazers, Gansey, Adam, Ronan and Noah, and to the concept of the ley-lines (paths of spiritual energy) which cross-cross the world. It is on one of these ley-lines, Gansey believes, that the legendary Prince of Wales, Owen Glendower, might have passed from Wales to Virginia.  It is a book of spirits and psychics, of good and of evil, but mostly, it is a book about friendships, and leaves you wishing that there was a seat left in Gansey’s orange camaro for you too. Having lived in Wales and made friends with people to whom Glendower feels like family, and then having crossed the Atlantic (by plane, not ley-line, I hasten to add) to live in the US, this book just drew me in immediately.

Then came book two of The Raven Cycle. The Dream Thieves takes us deep into Cabeswater with Gansey and Blue, and even deeper into Ronan’s dreams. And at last, book three is almost here. October 21st sees the publication of Blue Lily, Lily Blue and there will be one more book after that to round off the series.

But here’s my problem.  I desperately want to read it as soon as it comes out, but to do that, I will no doubt have to re-read the first two beforehand.  But then, when book four comes out, I will have to re-read the first three books in anticipation of its release, just to make sure it’s all fresh.  Given that I have dozens of books sitting in my mental to-read list, and thousands more waiting for me to find them and add them to that list, can I really justify reading the same four books a total of ten times (ie Book 1 – Books 1, 2 -  Books 1, 2, 3 – Books 1, 2, 3, 4)?

Well, given that the four books are The Raven Cycle by Maggie Stiefvater, the answer has to be ‘Hell, yes!’

And if you haven’t yet read Raven Boys or Dream Thieves, by my reckoning, with three weeks to go until publication date, you should have just enough time to read them both if you start right now! Go on, get on with it!

To see more of what writer, musician and artist Maggie Stiefvater gets up to (including a video painting a really cool graffiti knife onto her own car, just like the one in Dream Thieves) visit her at: maggiestiefvater.com

And you can also visit You Tube to see the unnerving new trailer for Blue Lily, Lily Blue.