Kicking it up a notch at the SCBWI Austin conference

What a great weekend I’ve had at this year’s Austin conference of the Society of Children’s Book Writers and Illustrators.  The theme this year was Kicking it up a Notch, and it certainly inspired me to do just that.


"You cannot compete with a child's imagination - but you can foster it, support it, extend it and, most importantly, give it space."  EB Lewis

Undoubtedly, the highlight of the weekend was the amazing illustrator, EB Lewis, who opened the proceedings with a fantastic keynote speech about mastering visual language, but also spend two hours or more in the Sunday workshop painting watercolors in front of us as he talked about his art, his storytelling and his approach to both.
As you can see from the photos, his work is so beautiful and his words were so wise - I was amazed at how much of his illustrator’s wisdom was directly relevant to me as a writer too.  One of EB's pearls which really struck a chord with me was this, "Enjoy playing in your sandbox while you are in it - don't yearn to finish too soon."

As a new writer desperately hoping to be spotted and published, it does seem sometimes that I can't get my writing done fast enough so I can get published, that I am not really enjoying the process, I'm not any more sitting having fun in my sandbox.


"Kids don't care what you know until they knew that you care."  EB Lewis 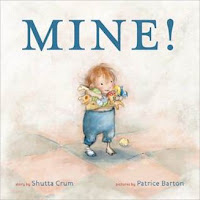 We had a fascinating session on the magic of picture books by the indomitable pair, writer Shutta Crum and illustrator Patrice Barton.  Their new collaboration, Mine!, is a beautifully crafted pre-school picture book that has only nine words in at – all “Mine!”  Oh, and there’s one “Woof!” too!  Their fun presentation to us gave us an amazing insight into how much deep thought goes into writing a “simple” boo, and how clever the illustrator can be in creating a full visual narrative to surround those nine words (and one woof).  This is a truly beautiful book, and I just wish my pre-teens were pre-school again so I could read it to them.


"In picture books, every book has to have a plot, even one with zero words.  And every page must have a level of excitement to make a child want to turn the page."  Shutta Crum 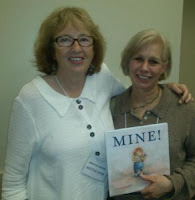 Patrice was awarded a coveted SCBWI Crystal Kite Award for her illustrations during the conference.  And well deserved too.  Congratulations!
I was so inspired by Shutta and Patrice that I place a successful bid in the Silent Auction for a picture book critique with Shutta, so now I am busy dusting off some old pic book ideas from years ago, and my mind is spinning with some new ones too.

As part of the Sunday workshop, I was one of a dozen writers who gave five-minute readings of their work.  What a fascinating mixture of formats – full poetic picture books for pre-schoolers, rhythmic early readers, opening chapters of dramatic young adult and middle-grade novels.  There was even a play, with the finale scene performed as a rap.  In the audience were the editors and agents who had been speaking and critiquing during the conference, and they were kind enough to scribble helpful notes to us all.  I was thrilled to receive such positive feedback to the first five minutes (about 1,000 words) of Aberlady, my YA novel-in-progress set in Scotland during World War Two.

It was also wonderful to meet up with friends I had made last year, particularly Samantha Clarke who also gave a fantastic reading of the opening pages of her YA novel.  I also met some new friends this year, Lisa Matthews, Sue Cleveland and Chad Rackowitz.  Conference organizers, Debbie Gonzalez and Carmen Oliver did a wonderful job yet again - thank you!

The Houston SCBWI Conference is coming in April, and I can’t wait!  Hope to see you there.

"Art all starts with one mark - one stroke, one step, one frame, one word..."  EB Lewis

Posted by Caroline Leech at 2:43 PM