Table Talk – any excuse for women to get together and talk

Yesterday was this year’s Table Talk luncheon, organized in aid of the University of Houston Friends of Women’s Studies.  Over 500 women (and a couple of brave men) came together to talk over a lovely lunch – what could be more fun than that? 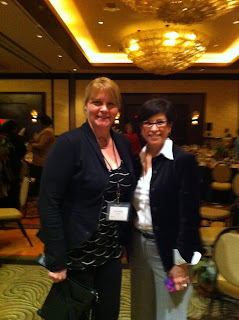 My great friend, Vilma Allen, invited me to join her table at the luncheon which had been organized by another friend, Susana Monteverde.  Each table had an invited speaker to lead the discussion, and we were lucky enough to have Dr Monica Perales¸ associate professor of history at the University of Houston.  Her book, Smeltertown: Making and Remembering a Southwest Border Community focuses on the way a community could develop around a large and filthy smelting plant near El Paso.   She told us it not only focused on the men who worked at the plant, but also on the women who supported them and the cottage industries these women created within their community to develop the economic prosperity of the town.

Over a delicious lunch, we ten women talked with Monica about how food and family are inevitably intertwined. She asked each of us for a memory of food in a family setting, and the discussion led off from there:  the child who made herself sick in her Italian grandmother’s kitchen by eating half a pan of uncooked and unsupervised gnocchi mix, and the sisters who made orange marmalade at home with their mother on a wintry afternoon and strawberry jam on a summer one;  the girl and her mother who bought fish straight from the boatman on a quayside and vegetables from farmers market and the woman she became who could still smell the ocean in her mind when she recalls that day; and the Jewish mother who secretly made matzo balls for the other housewives in her neighborhood because hers were the best and they wanted to impress their husbands with beautifully light dumplings.

Monica had done a similar exercise with her students at UofH, and was astonished to hear some of them say that they had no particular food memory from their family - that they had a working mother or were from a family who didn't really cook much.   But Monica rightly pointed out to those students that the food that means so much to our nostalgia in later life does not need to be home-made – the memory of a working mother tearing open a packet of commercial cornbread mix resonates as much with a child as the memory of picking vegetables from the garden to peel and cook.

It was a fascinating event and set off so many triggers in my writing mind, the books are just waiting to be written…
Posted by Caroline Leech at 4:08 PM