Extended Interview with Sarah Alexander, Author of THE ART OF NOT BREATHING 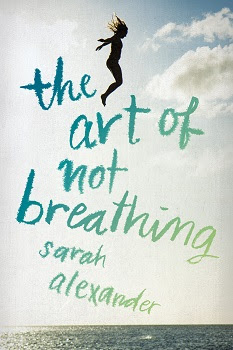 Caroline Leech interviewed fellow Brit, Sarah Alexander, about her YA debut, THE ART OF NOT BREATHING, a contemporary novel about loss and grieving, just published by Houghton Mifflin Harcourt in the USA and by Usborne in the UK.

About the Novel
Five years after the drowning of her twin brother, Scottish sixteen-year-old Elsie Main confronts tempestuous seas – and her family’s tragic past – as she tries to remember what really happened that fateful day on the beach. One minute Eddie was there, and the next he was gone. Seventeen-year-old Tay McKenzie is a cute and mysterious boy that Elsie meets in her favorite boathouse hangout. When Tay introduces Elsie to the world of freediving, she vows to find the answers she seeks at the bottom of the sea. A young adult debut that will appeal to fans of E. Lockhart’s WE WERE LIARS and Jandy Nelson’s I’LL GIVE YOU THE SUN. 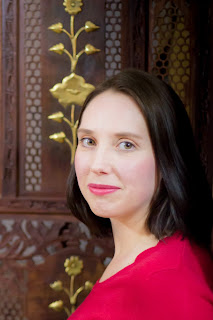 About the author
Sarah Alexander grew up in London with dreams of exploring the world and writing stories. After spending several years wandering the globe and getting into all sorts of scrapes, she returned to London to complete a Master's degree in Creative Writing at Birkbeck College in 2013. She works in publishing and lives with her husband and two chickens. THE ART OF NOT BREATHING is her first novel.

So, Sarah, tell us about the art of writing and THE ART OF NOT BREATHING

Caroline: What came to you first – freediving or Elsie?

Sarah: Elsie and her mum came to me together, almost fully formed. I always wanted to write about loss and grief, and also about an interesting mother/daughter relationship, so they came as a package. Originally I wanted Elsie to be quite down, not really knowing what to do with herself or with her life. She was just keeping her head down and getting on with it, but then I realized that she needed to find a passion. I had the seaside setting in my mind, but it took longer for the freediving to emerge. In the end, the themes of suffocation, isolation and escape combined with the seaside setting led me to the underwater world.

Caroline: So are you a swimmer or freediver yourself?
Sarah: I’m actually a scuba diver, rather than a freediver, because I like to breathe when I’m underwater! I have tried freediving though I don’t go very deep because that’s really scary, but I like to go a bit beneath the surface to see what is down there. I love the water, especially having that space to myself where no one can speak to me and interrupt my thoughts.

I qualified as a scuba diver in 2004 in Thailand and though I’ve not dived in Scottish waters, I’ve dived all over South East Asia, the east and west coasts of Australia, South Africa, the Red Sea, Egypt, Jordan, and the Galapagos. In Brazil, I even dived in an underground lake. To get to it, I had to rappel 300ft into a cave, and then the scuba gear came down on the rope. Once I’d had a scuba around, I then had to rappel myself back up.

Caroline: You and I have both written books set on the Black Isle in Scotland. What was it that drew you to let Elsie live in Fortrose?
Sarah: The idea for the setting came to me when I visited there. I have spent lots of time in Scotland because that’s where my father is from and I’ve other family up there, so I’ve spent lots of family holidays on Scottish beaches being whipped by the wind. To me, Scotland always felt like an idyllic family place but also the weather was perfect for my setting because I wanted somewhere windy and cold, with long dark winters and balmy summers. Interestingly when I did go on my research trip to the Black Isle, it was July and we had the most incredible weather, like being in Turkey. That was a bit weird, but I loved the long twilights, when you think it’s about to get dark, but an hour later it’s still the same, and that gave me such an eerie setting.

I also wanted somewhere that had some British wildlife, so the dolphins and the otters are in there, and obviously very cold water.

Caroline: There are several serious issues addressed in the book – bereavement, parental separation, fat-shaming and eating disorders. Did you set out to make them part of the book?
Sarah: It was always going to be a story about loss and grief, and all the characters have their own way of dealing with it. Elsie discovers freediving, her mum Celia drinks and stays out, her dad is absent. And I always wanted to write about male eating disorders. I didn’t know it would be in this book, but it just came with Dillon. I realized that there was a real physical connection between starving your body of oxygen and starving your body of food. So though the issues weren’t really at the forefront, as I got to know the characters they each told me how much pain they were in.

Caroline: Elsie smokes, drinks, steals, skips school and generally disobeys every instruction anyone gives her, yet we still know she is a decent person at heart. How did you know you could maintain Elsie’s good soul amid all the “naughty” stuff she does?
Sarah: I’m not sure whether I knew that I could or not. I just knew that she had all of these amazing qualities that no one else saw, and she was really the one that held her family together. She does all the caring, she looks after her mum, she keeps any eye on Dillon and also on Eddie when he was alive, so for me that was always at the core of her. And the badass stuff was her being a typical teenager and thinking, “What can I get away with?” She just tries things. I think that’s what drove her character forward. She doesn’t care what anyone else thinks, and that’s what I love about her.

Caroline: So how did you, as a writer, get to this point?
Sarah: Luck! No, that’s not entirely true. A lot of it is to do with luck, and the rest is just bloody-mindedness. It took me two years to write this book. I started it when I was doing my creative writing MA. I wrote a chapter for a class that I was taking, and to my surprise, everyone loved and said, “you’ve got something there”. So I went with it. It took me a couple of months more to get the story straight in my head, and then I spent about six months faffing about with the first ten thousand words. I then realized it was never going to get finished, so I gave myself a deadline of when it had to be done and stuck to it.  Fortunately, an agent loved it too, although she made me do endless revisions until she thought it was ready to go out on submission.

Caroline: And what is your writing process – every day or weekend binges?
Sarah: Both. Sometimes I block out all Saturday and Sunday, and write all day and all evening, and then other times, I’ll just do half an hour before work, half an hour at lunchtime and again after work, and that’s enough. And then I’ll spend a day bringing all those bits together. I didn’t really have a plan with THE ART OF NOT BREATHING, I just had an end-goal in mind, and knew I had to get it finished by a deadline I set myself.

Caroline: So what’s next? Another book?
Sarah: Yes, it’s work in progress… in my head and partly on paper… and in my phone… and on post-it notes… and on the back of my hand. It’s a standalone contemporary about fear. Fear in terms of being afraid, and also about not being afraid of anything.

Caroline: You are having an almost simultaneous UK/US publication, so how are you dealing with that transatlantic split personality?
Sarah: It is like having two different books. The US has different lead-times to the UK, so the draft of the US version was done months before the final draft of the UK version. That meant that every time I was doing a round of edits, I was making them in two different places, not to mention the process of Americanizing something when you don’t really understand American. I shared that task with an editor, though there was a fair bit of going back and forth. They changed the spellings, and they’d flag up something that they didn’t understand and ask me to ‘translate’ it, which was interesting. I’ve no plans for a US book tour yet, but hopefully one day.

Happy ending or realistic ending?
Realistic, even if it’s painful. This is really hard because, as a reader, I want realistic endings, but I also hate being unhappy and I like resolution. But as a writer, I want to tell the story the way it should be. I want to acknowledge that in life, stories don’t end when we think they end. So it’s a battle between my own needs and a reader’s needs, and hopefully I manage to get a balance between it being realistic, with a little bit of hope, but leaving it open because who knows what might happen next?

How’s your diet – caffeine and sugar or herbal and fiber?
Depends on my mood and whether it’s a day ending in a Y.  My favorite writing snack is carrot sticks… with wine. But if someone brings me a cake, I won’t say no.

What are you reading right now?
REBEL OF THE SANDS by Alwyn Hamilton which was recently published. She’s awesome.

What’s the best word to describe how cold the waters of the Moray Firth are?
Bloody freezing! Or Ball-achingly cold!

And the big question: do you consider yourself Scottish or English?
British! I don’t think I can consider myself Scottish because I’ve always lived in London, but if anyone asks, I do tell them that I’ve got Scots blood in me. I suppose that I’d break myself down to 25% Scottish, 25% Welsh, 50% London!

You can order Sarah’s book in the USA in hardback, e-book and on audiobook from your local bookstore, or from Indiebound, Barnes & Noble, Books-a-million, or on Amazon.


To celebrate the release of THE ART OF NOT BREATHING, Caroline and Sarah are giving away two copies of the book - one to a reader in the United States and one to a reader in the United Kingdom. For five different chances to win, use the Rafflecopter entry forms below for either the US or the UK, depending on where you live. Deadline for entries, midnight on May 6th, 2016.